Can A Raised Ranch Home Become A Traditional Home?

Thank you so much for your straight-forward guidance on your blog! I have very much appreciated the sharing of your many years of experience.

I am in a situation that I believe many other readers share and would love to see a blog post on this particular dilemma. Here it is:

Our home is quite modest and built in 1980. But my reality is that I have a love for the historical styles and quality craftsmanship of the pre-war era.

The general question is: Is there a way to take a modern/generic (in my case, raised ranch home) exterior and turn it into my preference for a classical/traditional home?

And, do so without doing a major exterior renovation? And, “overdecorating/building” for one’s area? In addtion, I don’t want to create a jarring discrepancy between the exterior and interior, either.

If you could share some thoughts on this topic I’d be over the moon!

Thank you for all you share, and wishing you all the best!

Thanks for the sweet note. These are such a good questions that Emily asks. However, I’m going to focus primarily on the exterior, but I’ll be linking to some posts later on which address the interiors that are lacking in architectural interest and what can be done about that.

In the US there are millions of ranch, raised ranch homes, split-levels and other one-story homes. And well… A lot of them pretty much suck, I’m sad to say.

The ranch-style homes became popular in the 1950s (remember, I lived in one of them in Indiana!) They were an off-shoot of the post-war modern movement. However, most of these homes were built on the cheap. That’s not usually a good thing.

The raised ranch homes and split levels became popular in the 1960s and apparently, were still being built in the 1980s. However, that was also the time of the post-modern “colonial” movement. You know, the residences that are frequently part of a development of poorly constructed but expensive homes that featured so-called “Palladian” windows, named after the 16th century renaissance architect Andrea Palladio.

However, they bear little resemblance to the magnificent windows of this iconic architect.

Forgive me while I strive to correct an embarrassing wrong, I hear all of the time.

A common malapropism is to refer to these classically arched windows as Palladium windows. Shudder! Why shudder? It’s because there is no such thing as a palladium window. They are PALLADIAN windows.

This is an excellent blog post written, not by me several years ago which explains it all quite beautifully.

Sorry, just had to get that off my chest.

The truth of the matter is that no matter what, there is a glut of bad architecture here in the United States. Of course, not all. But too much is.

And, the raised ranch homes and split-levels of which I was privileged to get to work in several, are particularly difficult. That is, if one wants to create a classical home.

Why are the raised ranch and split level homes difficult?

And, there’s a lack of any sort of architectural interest. No mouldings at all! But, also not blatantly in the strictly modern style.

However, I have written about this before and so, I’d like to take you to those posts, because there’s no sense in saying it again, when it’s already been said.

Is there any hope for a boxy home?

small rooms and how to make them look fabulous

can a modern style home mix with traditional mouldings?

What about the outside? The exterior. Can we elevate these designs to feel more classical?

And, we’ve talked about that too. But, not specifically for this style of home.

So, let’s assume that Emily’s home is in a neighborhood filled with homes of this style. Here are some things to consider.

I think if young people with families are buying these homes and fixing them up to some degree or another, then absolutely, it makes sense to do the same thing.

However, if the homes are in a depressed market and you won’t get your money back and you might be leaving in a few years, then it is wise to be careful. All of that is logical, I think.

But, how far can one go when fixing up a dated raised ranch home or split-level home?

Well, if you have a lot of money, you can do quite a bit! However, if funds are meager then, it’s going to be more of a challenge. And let’s face it, it’s never going to look like a center hall Georgian Colonial style.

A little over a year ago, I did a post that shows lots of before and after ideas for home exteriors. I love before and afters so much. Don’t you? Therefore go take a look at those homes for some great ideas.

And now, I have found some more terrific before and after images to show what’s possible with a raised ranch home, split-level and the like.

For the last 35 years or so, whenever I saw some hideous building, I would always think, If only they would just paint it white. It would look so much better.

And, while it doesn’t have to be painted white, the right house color can make a world of difference.

Here’s one of my favorite posts about exterior house colors for some good ideas, including white. Above is from the instagram feed of @asmallandsimplehouse. Indeed! And, in this small house, we can see that the white is IMO a far better choice than the obnoxious mustard color. Please note, that this is a progress shot and they are slowly turning this into the most charming cottage. They have since changed out the columns (square wooden) and a bunch of other small but significant changes. 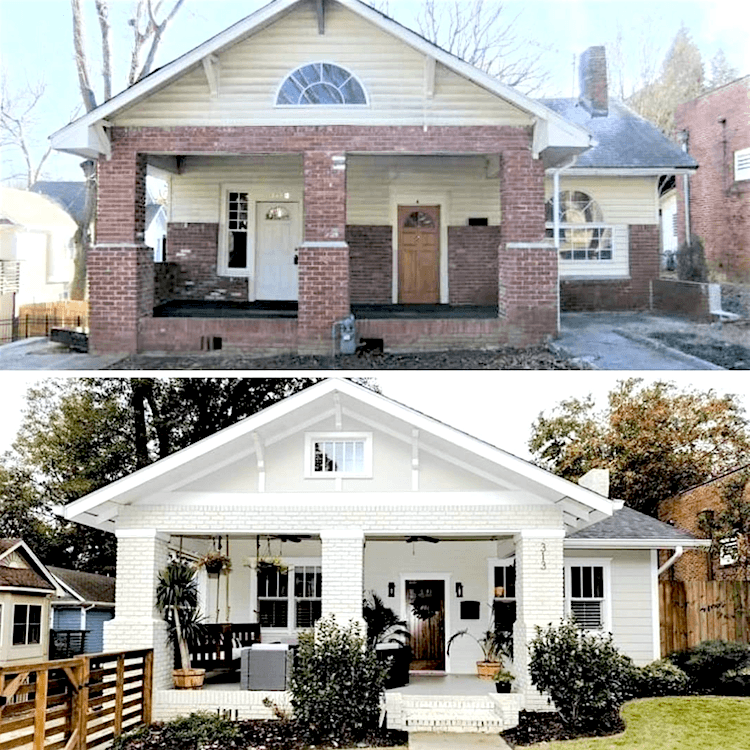 This charming after has had some architectural revisions as you can see. But the over-all main difference is the white paint. The landscaping has also helped to soften the heavy brick of this home.

We’re going to see some more brick in a bit and it’s quite interesting. And, one more fabulous facelift by Excovations

This is also reminding me of this recent post that has some great ideas for helping the curb appeal on a ranch home in southern Utah.

But, let’s take a look at a typical raised ranch home to see what we might be able to do to give it a fresh classical update. One, that will still fit in with the rest of the homes in the neighborhood If you don’t already know, here’s the deal with a raised ranch. 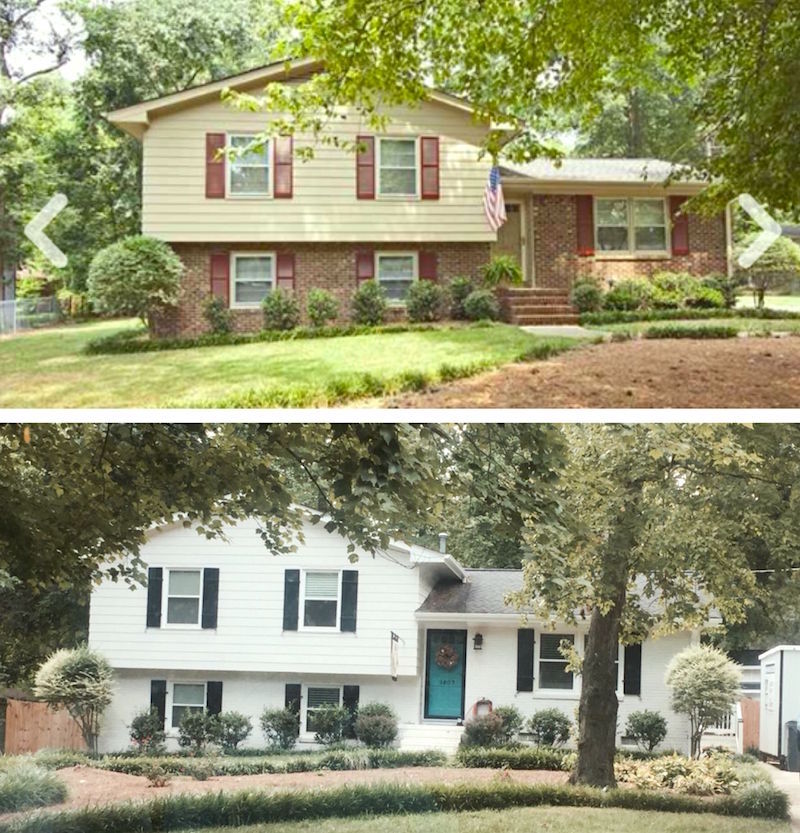 Frankly, no offense to anyone, but I think both raised ranch homes and split levels got their start by someone with some sort of substantial mental disorder. That is the only explanation I can come up with. Unless *I’m* missing something which is entirely possible.

However, painting it white, I think is a big improvement and gives it a fresh, updated look. split level ranch renovation – no idea the original source and the one I found it on is spammy. But, this is only for ideas. 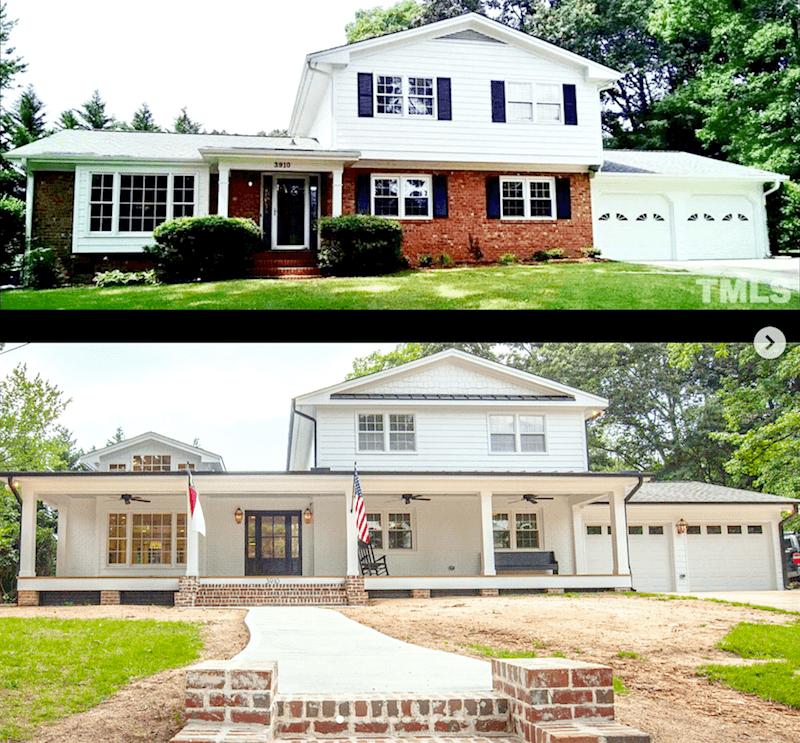 And, wowza! It’s difficult to believe that this was once the split level above, but it was. Please check out the instagram feed for many wonderful photos of the interior, as well. It’s quite stunning.

And I saved the best for last. This isn’t a raised ranch home or a split level. But, a fabulous remodel, just the same. There is an image like this floating around on pinterest, however, the quality of the image is quite poor and it’s really a shame because this is such a spectacular remodel. However, pay dirt. I found two much higher res images and then made my own graphic. I love it when I’m able to do that.

And also have it properly tagged so that when it’s pinned the credit goes to the correct people.

But… Do you notice something? I’ll give you a sec to see if you can figure it out.

Go look at the original home. What do you see?

YES! The original home had clapboard siding! But, the finished home is in brick.

Below is the missing link. 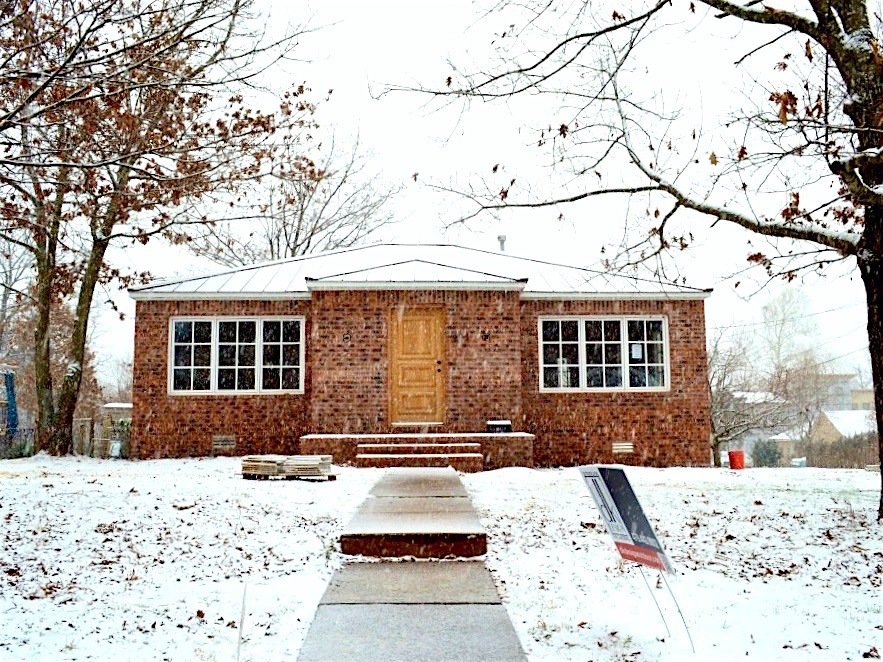 Daniel had a vision of a brick home with painted brick. So, he didn’t care what the brick looked like.

But… hmmm… Notice something else? Right. There are a lot of similarities with everyone’s favorite, Nancy Keyes’ old home in Atlanta that she sold about 10 years ago, I believe.

You can read more about that here in one of my favorite posts about the possibility of a starter home becoming a forever home.

The upshot is that a split level home or raised ranch is probably not going to be Emily’s vision of her classical dream home. But, there’s a lot that can be done to elevate the level from where it started.

Also, this is a good post to check out about some gorgeous front door colors and how they integrate with the rest of the house.