The Dangers of A Copenhagen, Denmark Vacation

Well, can’t believe that I’ve been here for six days in Copenhagen, Denmark.

It’s been the best trip ever!

The break has been great but I have missed my blog and missed you guys and writing. And no worries. This time I’ve taken a zillion photos. In fact, so many that it’s difficult to know where to begin.

How about at the beginning? :]

Wait, Laurel? What dangers? What happened?

I said that there are dangers, I didn’t say that anything bad happened, but I will be getting to that in a bit.

Many of us arrived a day early to acclimate ourselves and get some rest before the trip officially began last Tuesday.

True to form, I didn’t sleep a wink on my journey here and arrived in Copenhagen completely trashed. It’s such a horrible feeling. And, I’m always afraid that I’m going to sound like someone the customs people would rather not have in their country.

Alas, they allowed me in and I was reunited with my suitcase in record time. I found the taxi stand fairly quickly and a very nice driver took me to my hotel. The Lobby of our hotel named SP 34. It is a chic, modern hotel that was created about four years ago inside the shell of a centuries old building. You’ll see in a sec.

I learned that it is in one of the oldest sections of Copenhagen and only 500 meters from Tivoli Gardens. But, Tivoli was closed, so we could not see it. However, all is not lost and believe me, I saw an incredible amount of beauty which I am about to share with you.

This handsome young man checked me in. (while I was checking him out–hehe) ;] He told me that he used to be a travel blogger! My room. Love the drapes which included these sexy, dark sheers with an opaque dark gray curtain on a simple hospital track.

Danish design is spare. But the reverence for the old is keen. I love that dichotomy and it makes for an incredibly beautiful, old, yet modern city. This is a courtyard view out of those windows! While the windows are new, this 18th century-style window is commonplace throughout the city. Remember when we saw those windows when we were discussing transom windows? I very much enjoyed the same window in my sleek, modern bathroom. This view features a yellow courtyard as the hotel is comprised of more than one building.

Can’t tell you how happy, I was to see my room and once settled in
I had to take a nap. But then, after a meal and then a real night’s sleep, I awoke feeling surprisingly refreshed.

EVERYONE in Copenhagen is unbelievably nice and EVERYONE speaks perfect English. Well, at least everyone I have met. In fact, there are many times that I forget that I’m in a foreign country.

However, the city is not without its dangers.

Bicycles. Thousands of them and they whiz past you in a blur of wheels and helmet-less albeit svelte riders. After my son’s very serious bicycle accident in 2013, I can safely say that riding a bike without a helmet is a phenomenally risky occupation; that is, if one wishes to keep on living.

Apparently, many Copenhagenites (is that the word?) don’t care much one way or the other. Of course, that is their business; it’s just not something I can understand. So be it.

After breakfast, that first bonus day, a few of us went exploring the neighborhood we are in. Donna, Jennifer and Susie, three of my delightful trip mates– AND the bicycles!

And that is what I am focusing on today.

Susie and Donna knew some places that we needed to see and I was quite happy to let them lead me around.

The first place of note that we came across is Christiansborg Palace.  This is the working office of the Royal family, the Danish prime minister and where the Danish parliament holds their meetings. In fact, much of the palace is off-limits. Interestingly, although it looks quite old, the current palace was built in 1928. Twice before, the palace burned down. I learned that most of the old city was lost to fires and then rebuilt. 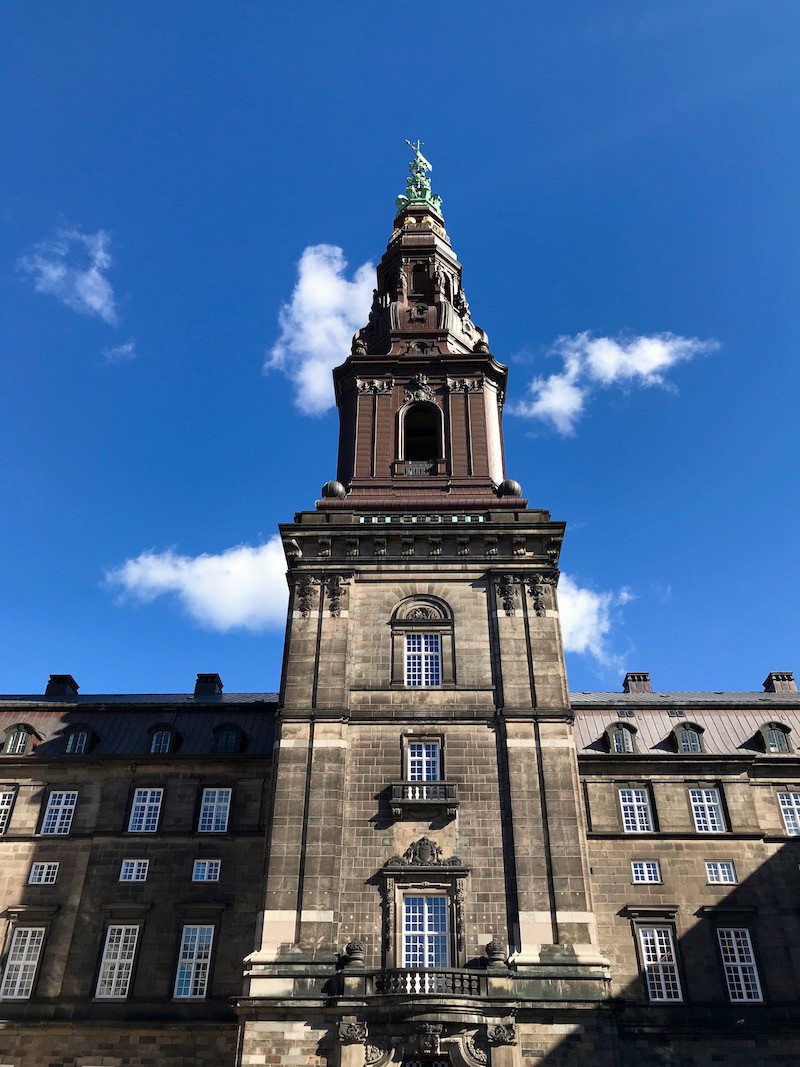 We headed straight for the famous tower. Way in the distance is the water and beyond that is Sweden! Back down on earth but still in the palace, I snapped this neo-classical classic.

More evidence of the classic nature of the color gray!

Although, I am not sure what the wrought iron railing is, design-wise. I would not call it neo-classical, however. Further down the hall. Just outside Christiansborg Palace, I found this hollowed out rocket? And, couldn’t resist posing for my friends. Just as I was about to step out, they insisted on snapping a pic while simultaneously reassuring me that I did not look like an idiot. Maybe the guard ducks into here if it’s raining? Once outside the building, we continued our stroll. I don’t know what this is, but I thought it was pretty cool with all of the columns.

Next we headed for a museum that Susie Feia from Wisconsin wanted to see. On our way, we passed this wonderful canal with the palace on the left. Later in the trip, we took a boat ride, but you’ll have to wait to see those images.

Can I tell you how wonderful it is to be lead around and not have to make decisions?

Below is the information about this wonderful Glyptotek museum in Copenhagen. We walked in and were greeted by this jaw dropping statue. This woman had a litter of babies, it appears! But, then we were surrounded with the most beautiful atrium filled with gorgeous architectural features and palm trees. At the bottom of this image is the statue of the mother with her litter of babies.

I took a lot of photos of this area. It reminded me a lot of the Isabella Stewart Gardner Museum in Boston.

This isn’t a huge museum, but it has a superb collection of statues

ALL of Degas’ bronzes, including the famous Little Dancer. Can I tell you how long I’ve dreamed of posing next to her?

I had no idea that this is where she lived! AND, she IS very little. I would say, no more than 30 inches tall. (apparently, there are numerous authorized copies in various museums.) My shoes? The Bzees Kiss sandal. I’m on my third pair. Love them! You can purchase them online here. They run true to size. My size is an 8.5 medium.

Here are some of the other statues I enjoyed, plus incredibly beautiful rooms, colors and ceilings! This is only a sampling of what we saw. Yes, the blue really is that vivid and check out this ceiling! Well, it’s now very early Sunday morning here and I am leaving in the late morning.

I wanted to get this out because there was no wifi on either British Airways jet coming over. Yuck. And there might not be any going back. And I will only be back late tomorrow night.

Oh MY! I almost forgot.

Thank you all so much. Because so many of you took the time to vote for me, I made the Amara Blogger Awards Shortlist! They announce the winners on October 25th.

In any case, I am very honored and grateful to have come this far. There are a few blogs that I am quite surprised that did not advance.