Are You Making This Common Kitchen Design Mistake?

We moved into our dream home about 2 years ago. Well, it’s dream except for the kitchen! The kitchen design sucks!

The home is from the early 1800’s– A Federal style home with super high ceilings.

The previous owners, or maybe the ones before them, put in this kitchen that’s too gross for words. It’s oak and the cabinets look stuck to the walls. Oh, Laurel, it’s just horrid. Positively horrid!

So, I found a kitchen place that was recommended to me by a friend and I paid their fee and they provided this boiler plate design that I’m so sick of. I know it’s not right. It’s everything I don’t want and it just doesn’t look like the rest of the house. It’s like they are on auto-pilot and pretty much generate the same kitchen for everyone.

Of course, I want it to have modern conveniences, but I also want it to be in the manner of the period in which the home was built? I’ve done some research and I just want something really cool that doesn’t seem so kitchen-y. Heavens, no, I don’t think that you’re nuts at all! I think that you’re a pioneer in a growing movement towards homes which are less “decorated.” In fact, in the early days of my blog, I did a post about undecorated homes. This trend, if anything, I believe, is gaining more and more momentum. It’s a trend that I love and am hoping is the wave of the future.

The younger generation lives differently. More casually and with less pretense. This can be seen in the popular magazines, Domino, Lonny, Domaine and the popular lifestyle blog, Apartment Therapy.

It’s a kitchen, but it’s not like the ones we’re so used to seeing in the USA. 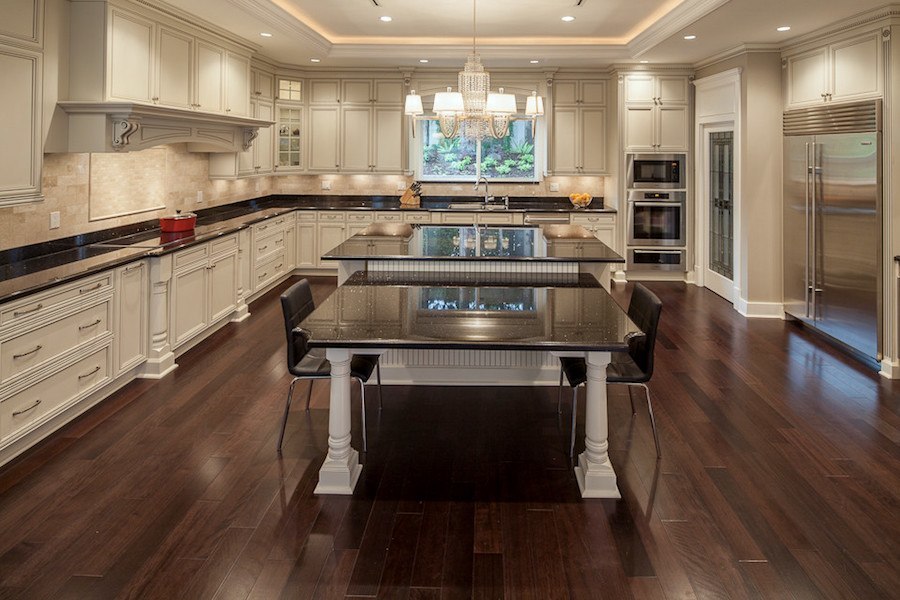 The kitchen above is a converted airplane hangar built for a staff of 12 plus the family that lives there. The staff spends dozens of hours creating hundreds of delicacies for parties of up to 300 guests. If this is you, then of course, you would need a kitchen like this.

The only saving grace is that an hour or two here, replaces the necessity to go to the gym.

Well, first of all, they don’t ever have the typical run of closed upper cabinets and the storage is generally more furniture-like.

I will be getting into storage issues later on because I know that many readers are very concerned that without upper cabinets there will be inadequate storage. As a designer, I would never sacrifice function for form. However, it is possible to have both.

There are several subsets of unkitchens.

Is often seen in loft-type homes with exposed beams and pipes. It often features high ceilings and large windows, exposed brick walls, natural stone and/or concrete. It may also have some rustic elements. It may or may not have industrial unkitchen features but it always features natural materials like stone and rustic woods. There may be paint but it’s genuinely old looking. Like the industrial kitchen, the ceilings are often high and with a lot of large windows. Is a smaller kitchen with similar characteristics of a rustic kitchen but on a small-scale. It often has a homey, cozy vintage feel. 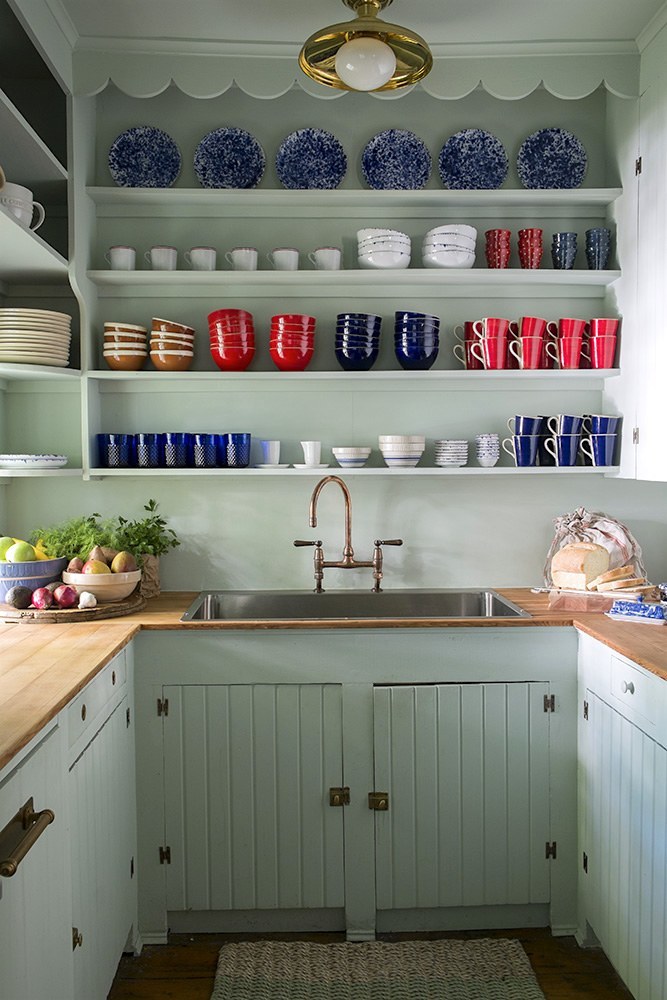 The my-first-apartment-that-I-share-with-5-other-people-in-a-5th-floor-walk-up-apartment-in-Brooklyn.  But not really, in this case. It is the fun, funky, stylish apartment of photographer Debi Treloar The young, rich unkitchen. This is a film set for the movie, The Intern. I haven’t seen it. Do interns make that much money? Maybe these are trust fund interns. ;] It is way cool, though! This might seem like a contradiction in terms, however, the word “traditional” is a common misnomer IMO. Are we talking late 20th century (ersatz) “traditional” or 18th century the real-deal traditional? What most people call traditional to me, is anything but.

Trad unkitchens have elegant, upscale refined cabinets for the most part. They lack rusticity but there might be a surprise or two. They also often feature very clever and efficient ways of storing kitchen supplies and food. 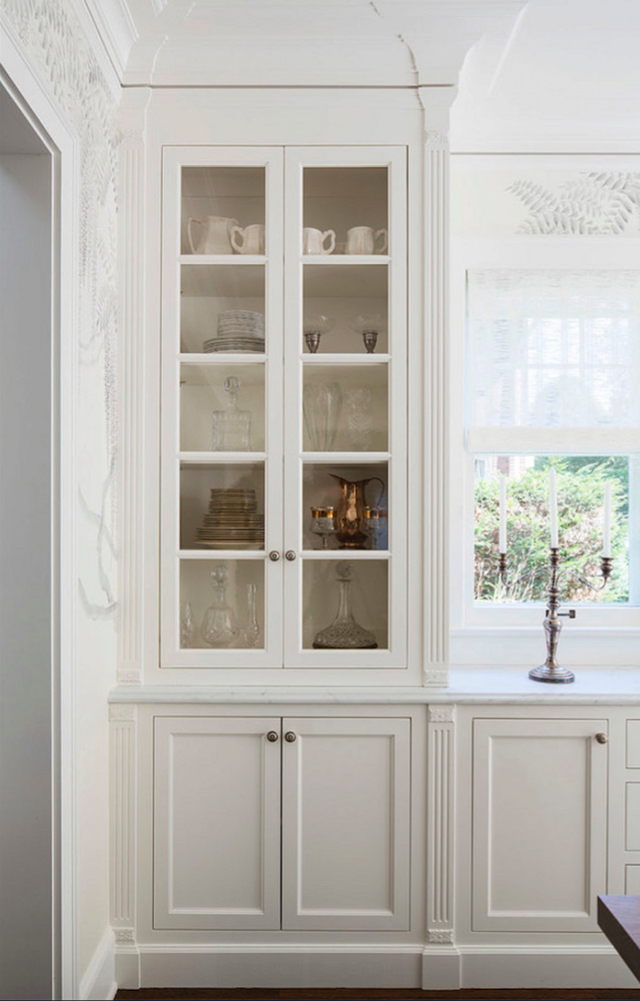 Hold the phone Loretta! Perfection plus! I’ll take this one please! Heidi is an amazing designer and she has a gorgeous website too! Unkitchens may have some recessed down-lights (aka: high hats) but often feature vintage lighting, chandeliers and minimal or less obtrusive down-lights. Other characteristics of unkitchen kitchen design

They look as if they evolved over time. They are not glitzy. There are often wonderful pieces of Art 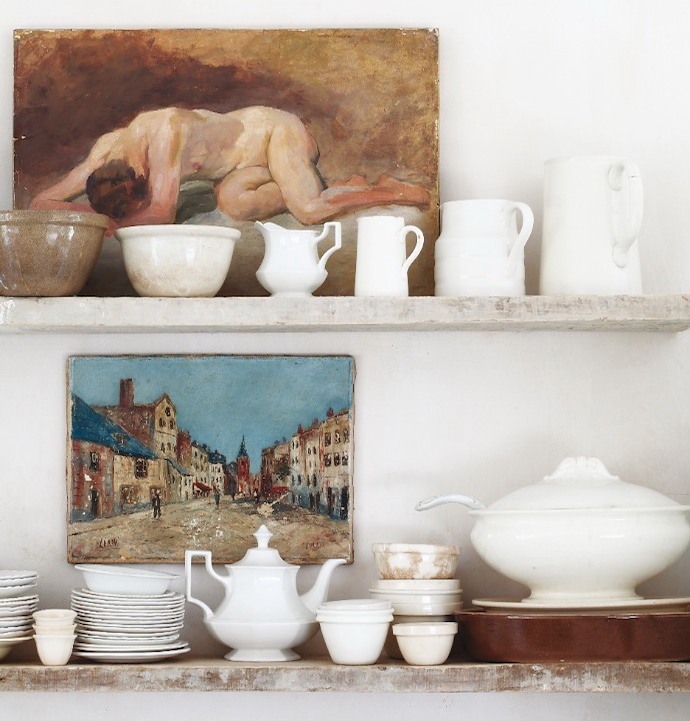 Nelia Dewet via House and Leisure

Sometimes there is tile, often in a brick pattern going all the way up the ceiling

They usually feature a large under mount farm sink or some other large sink. Another growing trend is the integrated stone sink which is an extension of the stone counter top. 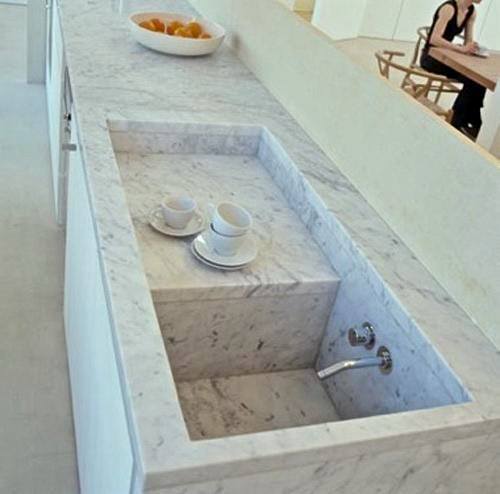 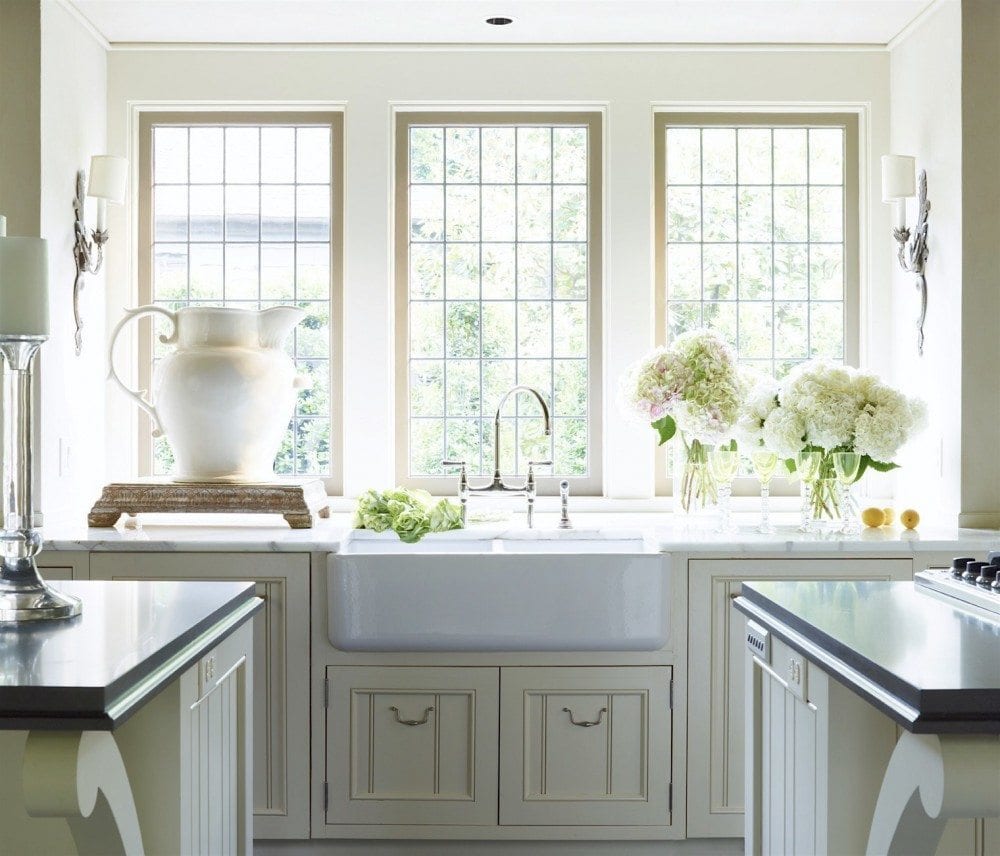 So, so pretty. I heard Susan Ferrier speak at the High Point Market and she is totally down to earth and delightful. For more of Bobby McAlpine, Booth, Ferrier and Tankersley click here.

Unkitchens have genuine antiques or antique looking furniture, plate racks and separate pieces of furniture instead of everything totally connected. 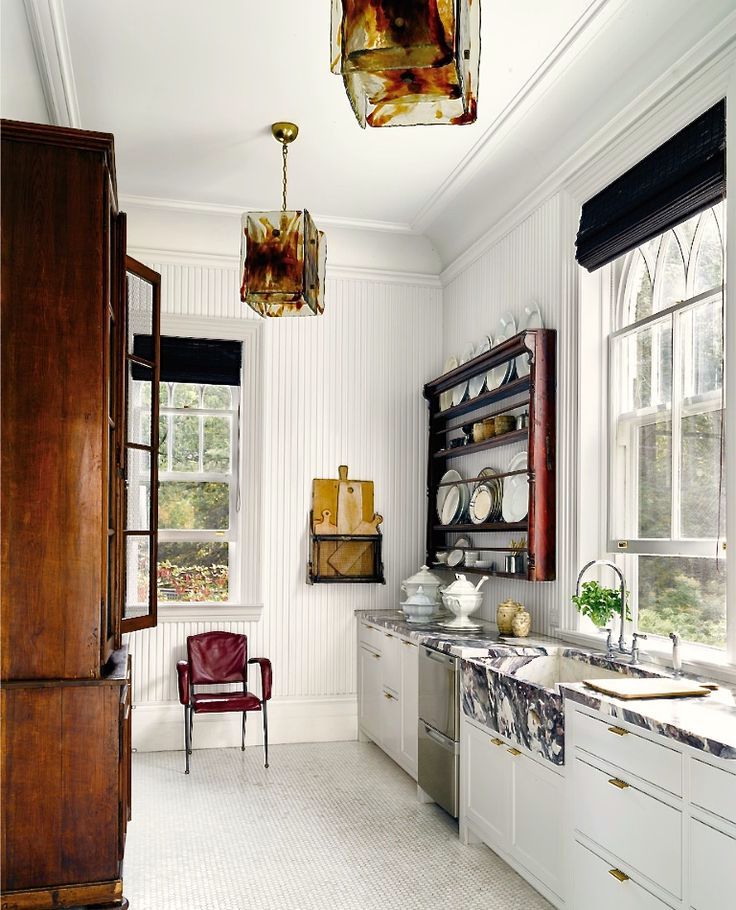 Or, they are fitted with built-in floor to ceiling cabinets with pull-out pantry drawers or glass-door cabinet fronts. How wonderful are these gorgeous cabinets?

Please note, when I say antique, I do not mean this: I mean this. (below) 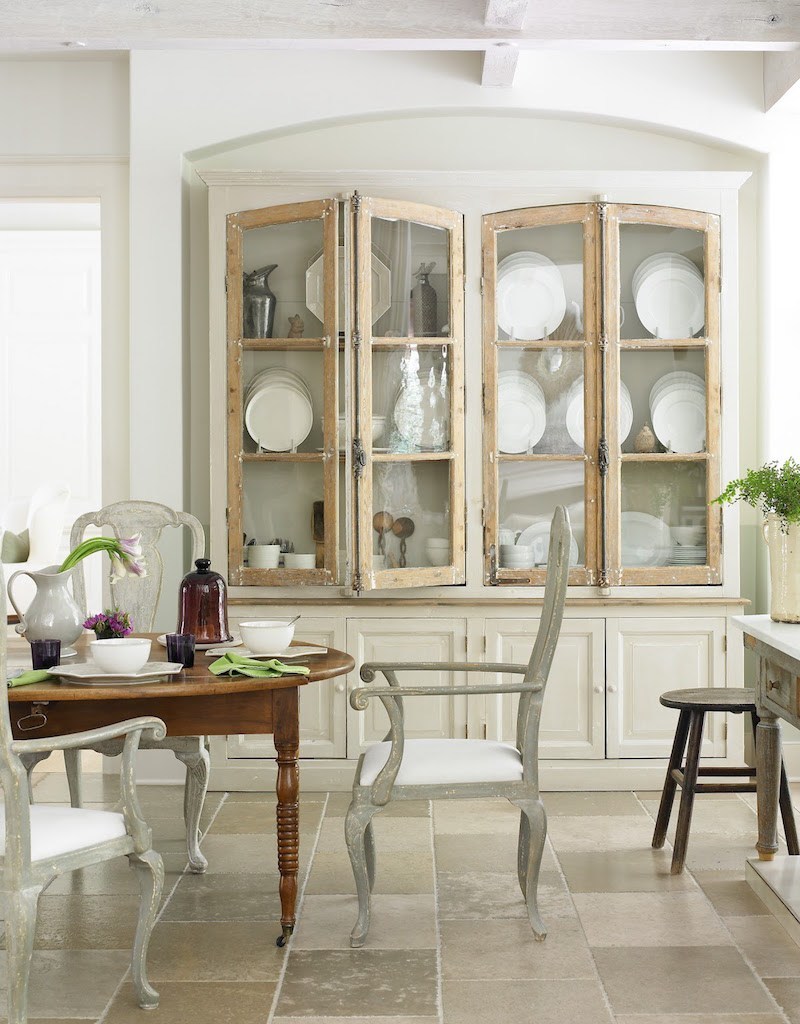 The former is faux, fake, ersatz, whatever you want to call it. It is obviously a reproduction and is over done. The wall cabinet matches the island. You will not see this matched set look in an unkitchen.

Yes, in the back row… You look like you have a question?

Well, Laurel this is all very well and good but where are we to put our stuff?

And if I put in one of these unkitchens, what is that going to do to our resale value?

Those are two excellent questions which I’m going to address right now.

First of all, designing an unkitchen requires a bit of re-programming of one’s thinking. Imagine someone from 300 years ago being told that their kitchen needed to look like the airplane hangar. Why you would’ve been tarred and feathered and dragged through town!

A beautifully designed unkitchen is going to have everything that a typical 2oth century kitchen would have, just not in the same fashion. There will be PLENTY of storage!

Yes, in the third row, you’ve had your hand up for while.

Well, I live in a 600 square foot apartment with a slob of a husband, a labradoodle and 3 goldfish and I absolutely must have overhead cabinets because if I don’t, I won’t have anywhere to put anything OR any counter space!

Fair enough. And I agree. Small kitchens in apartments are by virtue of their tiny size exempt from the no overhead cabinet rule. However, there are still components of an unkitchen that can be followed to make the kitchen feel more “un.” One of those is to make sure to utilize every bit of space by having the cabinets go all the way up to the ceiling.

I have time for one more question.

Yes, in the red sweater.

STORAGE??? What about keeping all of that stuff clean? I just want to put it away somewhere.

Yes, yes, I realize that this is a burning question. Of course, you can put it all away out of sight.

In fact, the firm, i29 Architects designed a kitchen with NOTHING out! It’s not an unkitchen. It’s an invisible kitchen. This was created in a Paris flat and all of the appliances, dishes, etc, are behind the closed doors. The doors were fabricated to match the existing panel moulding. How cool is that? But even more so is the minimalist island which at only about a half-inch thick houses PLUMBING and a COOKTOP! Holy crap! That’s amazing! And even more amazing is the fact that they created an invisible sink! I dunno. There is no way my kitchen could ever have nothing out. At least not for more than about 10 minutes. haha! It is not in my DNA. I could sooner grow hair on my chest than keep a kitchen looking like this. I do love the moulding and doors, but I could’ve gone with a really cool antique something or other for the island.

What about you? Could you live in a kitchen with nothing out? All the time? I guess this feels a little cold to me.

Or is that just the two feet of snow that God just dumped on us? :]

If y’all are interested, I will continue this post with lots more storage ideas so that your unkitchen will not only be stylish, it will function beautifully for you–with plenty of clever storage ideas and more!

Click the Image Below To Get Your Peel & Stick Paint Samples – Made with 100% Real Paint!!