The Shocking Truth About Restoration Hardware

Sometimes when I start to write one blog post, it becomes apparent that the subject matter I was intending to write about morphs into something else.

I had intended to carry on with this exquisite Florida home (and I will–) by the beatific and immensely talented Summer Thornton. However, I got just a leeeeetle bit side-tracked by a massive road-block. 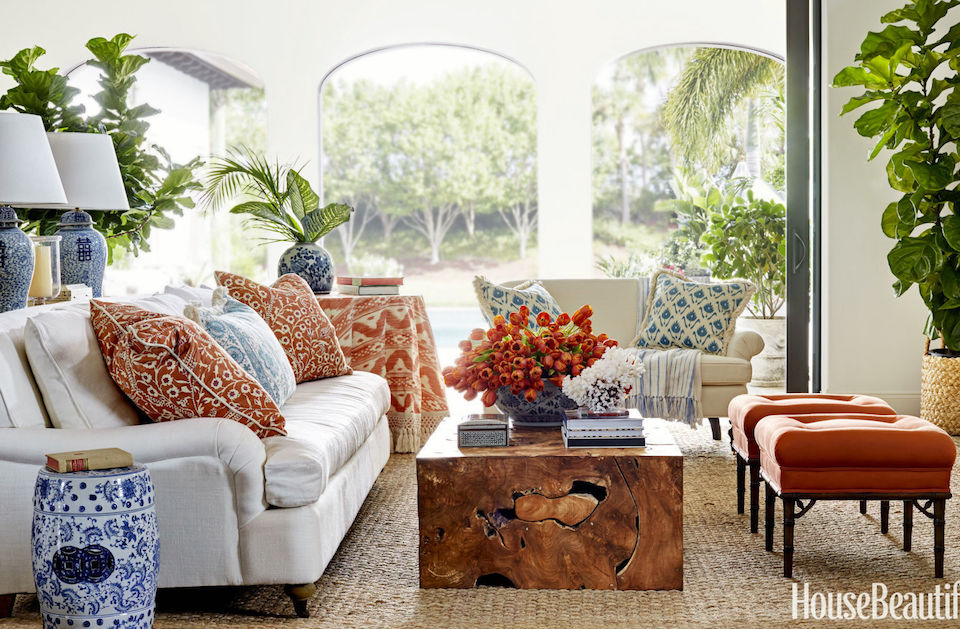 What is it Laurel? I don’t see anything wrong?

What you don’t like the coffee table or the fact that the sofas don’t match?

No, it’s neither of those. It’s the sofa.

It’s from Rip-off Hardware. Oops sorry. I mean Restoration Hardware. And since they pretty much stopped selling HARDWARE, they’ve shortened the name to RH. I don’t know what happened and don’t want to jump to conclusions. The sofa looks fine in Summer’s room. And this in no way is meant to disparage her or her work, because I admire her talent immensely.

However, I need you to listen to this very carefully.

You are not to buy a sofa at Restoration Hardware.

And frankly, probably nothing else either except maybe sheets. You can get your sheets there and maybe a framed print of the Flat Iron Building.

Oh wait. No. Forget the print. Even that is a piece of crap in my opinion.

Hey, why so bitter, Laurel? I LOVE Restoration Hardware!

………… between 1987 and 1991 I lived catty-corner from the Restoration Hardware store across from the iconic Flatiron building in New York City. The flat iron building erected in 1902 at 22 stories tall was considered quite the skyscraper in its day.

Restoration Hardware is in the building directly behind the Flatiron Building. An Italianate structure, it was built in 1862 and was one of the first commercial buildings constructed in this area.

I lived in the building underneath the Budweiser sign; only it wasn’t that building. They tore that one down and erected a modern high-rise apartment building, Madison Green, circa 1981. My future husband lived there when I met him in 1986. 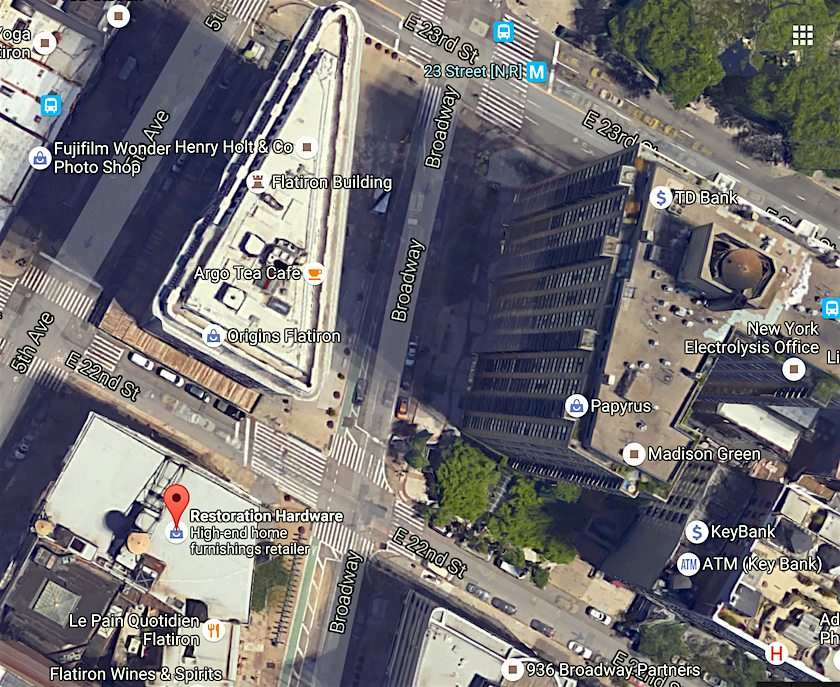 Via Googs maps is a birds-eye (duh) view of the Flatiron, Madison Green to the right and Restoration Hardware; a high-end home furnishings retailer.

They got that part right. The furnishings are very expensive.

This is how I remember the store looking – photo: Daytonian in Manhattan

and I have fond memories of going in on occasion or just walking past.

Restoration Hardware got its humble beginnings in California back in 1979. (coincidentally the year my husband and I moved to NYC). It’s growth was rapid and by the spring of 2001, there were over 100 branches of the chain.

The store had its ups and downs and at a low point, they brought in Gary Friedman, the president of Williams-Sonoma in 2001 to rescue it. He is the current CEO. (although there was some uhhhmmm… trouble he had in 2012 that caused him to “step down” for a few days.)

To Mr. Friedman’s credit, he never finished college and took a job working as a stock boy at the Gap and worked his way up to the top position. That’s admirable.

He obviously, brought renewed life into the brand which survived the recession of 2008.

And then… something happened. It happened about two years ago. I recall receiving my 17 pound bundle and thinking they must be barking mad. We have a recycling bin adjacent to our mailboxes and there it went immediately along with the other junk mail. This couple wrote a very funny satire on the best uses for the Restoration Hardware attempt at deforesting the world.

I remember shaking my head and thinking– who’s paying for all of this?

(you know the answer to that one)

This massive renovation was occurring at the same time at the Flatiron store. Rebranding okay, but black? On the other hand, the darkness suits them.

Yesterday, I found out that CEO Gary Friedman has put his California home (well, one of them) on the market for 10.5 million.

via the Wall Street Journal

Hmmm… you don’t suppose he charged all of that Restoration Hardware stuff to the business?

Well, if he did, did he deduct retail or wholesale?

Because if deducted wholesale, I can tell you that he furnished this entire room for maybe $1,500. Yes, four ginormous sofas, coffee table, dining table… chairs… lighting…

Fair enough. I didn’t believe me either.

That is why I did some digging.

And it didn’t take me more than a couple of minutes to uncover the shocking truth about Restoration Hardware’s “high-end” furnishings.

I mean, everyone knows (or should) that it’s cheap Asian crap.

But just HOW cheap is it?

I found many sources on the internet that carry either the exact products sold by RH or at least close enough that RH could make some adaptations to make it their “own.”

These sources are all in China and they are all selling to ANYONE, not just furniture dealers. It’s the same stuff and often you can purchase only one of something. Yes, the price for one of something is more than if you buy in bulk, but even those prices are a fraction of the retail price RH is charging their customers.

Now ARE these the exact pieces sold by RH? Probably not. They might very well be knock offs. But it shows how much the same or similar products are selling for. Three pieces of this or more are available to anyone for $79.00/each.

Did you hear me? SEVENTY-NINE DOLLARS??? 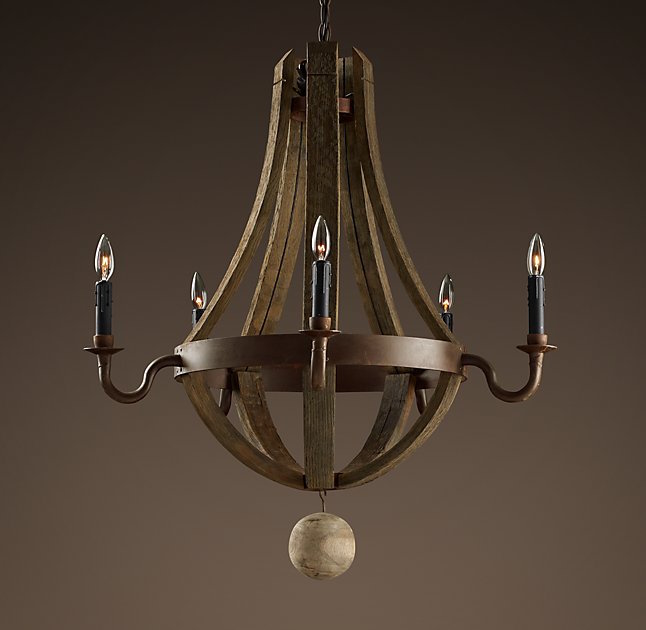 Even if I bought only ONE of these from China, the price is still only 1/10th the price of the Resto piece!

What’s that about a membership at Restoration Hardware?

Here’s what Resto has to say about their finely crafted $79 chandelier from China.

“Captivated by the timeworn beauty of discarded old French wine barrels, designer Rudi Nijssen reimagines them as a chandelier. Handcrafted from reclaimed French oak staves and hoops, the openwork design – inspired by the French Empire form – is at once rustic and refined, organic and elegant. At home indoors and out, it proudly bears the marks and imperfections of salvaged wood.”

Oh, I’m laughing so hard, my side is hurting.

Sure, after they’ve been rescued from a Chinese landfill. 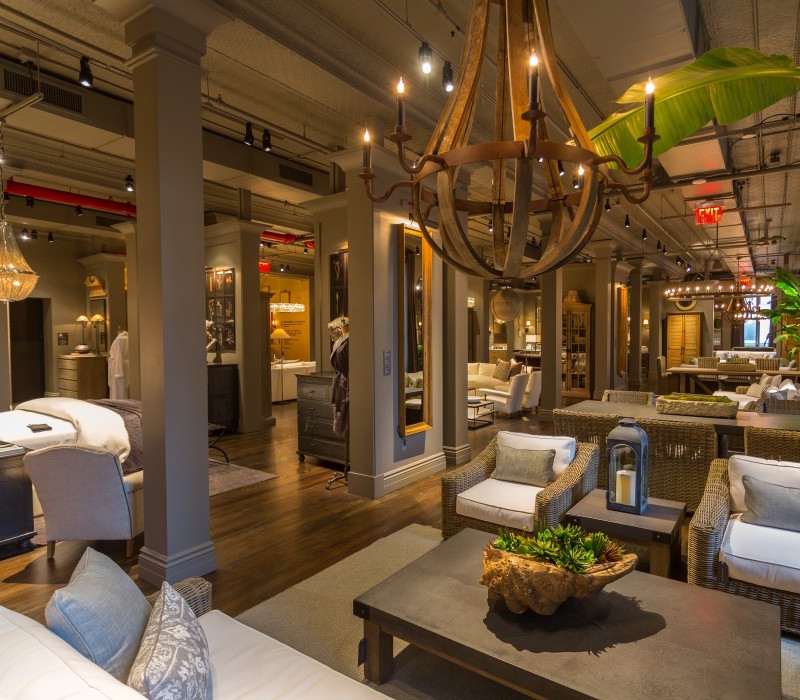 You already know the answer to that one too. I mean, they have to pay for all of those trees and printing somehow? Right?

Now, is it possible that the lighting store is ripping off RH?

But there are dozens of vendors who carry this light fixture or else it’s very close and the price is a lot less. Here’s one a similar Wayfair chandelier for half the price of RH.

There are hundreds of manufacturers in China. And sure, sometimes they change some of the details, but often. nope. What You See Is What You Get. WYSIWYG. Gosh, they didn’t even bother to change the image. But wait. It says that they sell FROM ONE DOLLAR/Piece???

Is Restoration Hardware paying ONE DOLLAR? (probably not that low)

What are we paying? Do these look familiar?

These all sell for from $6-13 a piece. And BTW, they have an SSL certificate. In plain English, it means they’re legit. Not that I’m recommending them; I’m not. I do not recommend buying from a source over seas unless you know what you’re doing and know the company. Furthermore reports have it that these ads are a sham. So buyer beware. 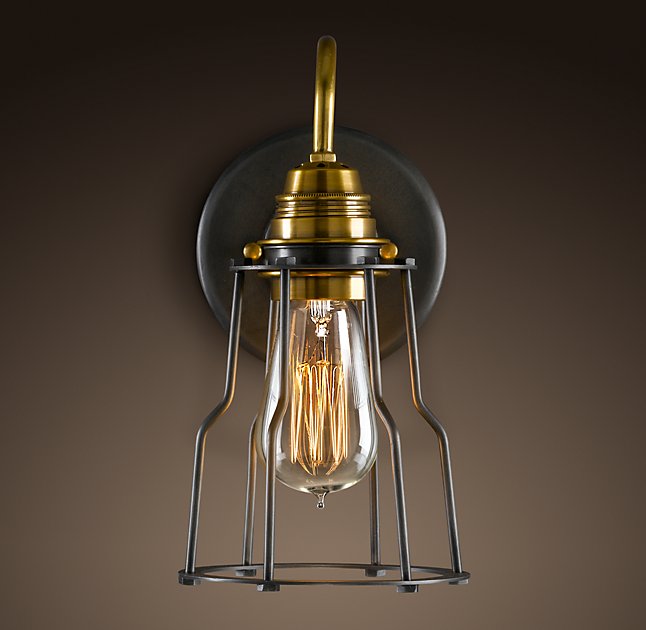 Oh, I could keep going, but you get it and I have better things to do with my time.

Can you get other Restoration Hardware items from China besides lighting? Yes, I’m sure. And you can also get far better deals for the same stuff on Ebay. It’s usually about half the price that RH is selling it for. And that’s my primary issue with Restoration Hardware.

They are touting themselves as a HIGH END purveyor of home furnishings and it is anything but. It is cheap crap from China.

But there’s another disgusting problem that is really behind this expose and it’s this.

Not only are they screwing the public, they have cheated many loyal designers who shop there for their clients. People like me. (well, not me. I don’t shop there). Only now, Restoration Hardware is giving the designer discount to EVERYONE! And that just plain sucks. It’s rampant greed at it’s finest.

However, these shoddy business practices appear to be catching up with them.

I hear from my fellow designers that they have had nothing but problems with the quality of the furniture.

And they aren’t alone according to Consumer Affairs. Out of 43 ratings, 33 gave them one-star.

Furthermore, RH is still foisting this garbage on us. 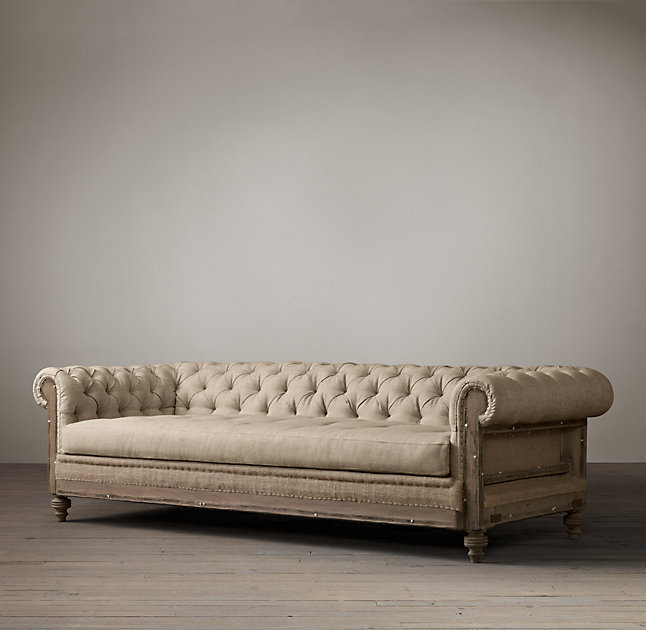 We already went through this abomination in an old post about the best sofas to buy. 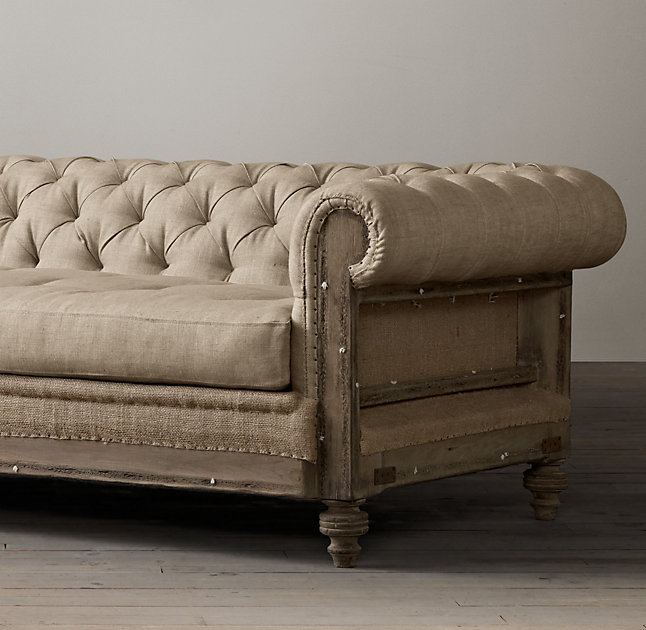 A detailed shot to hi-light the grotesqueness. I think I’ve made it very clear how I feel.

I want people to buy quality. And while I realize that not everything can be made in this country, a lot of my vendors ARE producing a quality product in the USA and selling it for an appropriate margin.

And that’s all I have to say about that.

I’ll return to our fabric and furniture offerings on Sunday.

To end on a far happier note. The fabulous artist, Allison Cosmos from Sunday’s post, discovered it and sent me the most darling note today. And she told me that she’s going to be unveiling some of her prints at Zoe Bios Creative  at the next High Point Market. I will definitely be adding those resources to Laurel’s Rolodex.

Oh my stars! I almost forgot. We do have three winners of the contest and two of them have come forward to collect their prize, but I haven’t heard from the third one. I’ve sent out two emails. I’ll give her another day or so and then I will go to the next person on the list.

I used random.org to randomly pick the winners. Everyone was assigned a number and I told it to pick 3 numbers and the numbers connected to the names were the winners. Then, I realized that I better have some alternates, so I did it one more time and picked 3 more.

Hearty Congratulations to Susan S., Aubrey T. and Suzy K.!!! (who I’m waiting to hear from)