Toile De Jouy – What Is It? And What Makes It Special

In fact, I worked on this post extensively last Tuesday, the 16th of March. However, because it’s so detailed and required a lot of research, I decided at 7:00 PM to substitute another post about green paint colors.

However, this post is partially a continuation and discussion of Chinoiserie themes from the 18th and 19th centuries. And, there was some discussion as to the appropriateness of Asians appearing on fabrics and wallpaper. My aim to show the historical significance and appropriateness of these depictions.

I am hoping by the time we come to the end of the post about Toile de Jouy; you will feel enlightened and joyful.

To understand the roots of Toile d Jouy, we need to go back in time to the 18th century.

This is when this fabric became wildly popular in France and quickly traveled to other European countries.

I am going to go over:

And, some modern-day examples of toile de Jouy (AKA: toile) that I’m pretty sure are going to surprise if not downright shock some of you.

If you are in a hurry, you can hear the entire pronunciation here (one second into the video) with the correct pronunciation of Francais.

However, if you have literally one minute, the rest of the video featuring this creating of a modern-day toile de Jouy is quite beautiful to watch and listen to.

Okay, now that we know how to pronounce Toile de Jouy, we can ascertain from the video that it’s a fabric. But I bet that 95% of you already knew that.

How did Toile de Jouy get started?

Well, I read that it had its origins in Ireland, maybe a couple of hundred years earlier. However, since this is only a blog post, let’s focus on 18th-19th century France. This was definitely the heyday of Toile de Jouy fabrics.

In my opinion (and a lot of other people, too.) From around 1740-1840 was the richest, most beautiful, and abundant period of history in terms of art, architecture, and music.

Sure, there were some not-so-great things, like a lot of fighting and the seemingly capricious act of chopping people’s heads off at whim.

During the 18th century, there was a keen interest in cotton, particularly Indian Cotton. They were washable, and the dyes were color-fast and vibrant. However, the import of these pieces of cotton was wrecking the livelihoods of those selling silk, wool, and other local textiles. Therefore, there was a ban on cotton in France. However, I don’t think anyone lost their head over it.

Eventually, they repealed the law. One exceedingly talented artisan Christophe-Philippe Oberkampf established a factory for printing cotton materials in Jouy-en-Josas, a little village near Paris. There were others, but he was the most famous.

Below are some of Oberkampf’s Designs. However, his factory produced about 30,000 of them! All kinds of themes.

These are all original from the 18th and 19th centuries. Below are some 19th-century Toile de Jouy patterns. While most of the toiles were two-toned, there were also some multi-colored toiles.

So, how is Chinoiserie connected to Toile de Jouy?

Another incredibly prolific and amazing artist Jean-Baptiste Pillement is credited for creating many Toiles using Asian motifs. If you recall, anything eastern was coveted and inspired many designs in textiles, ceramics, and furniture in Western Europe of the 18th century. The rest of the images are antique Chinoiserie toiles by Pillement. Above and below are two gorgeous examples of his work. Pillement also did many two-toned Chinoiserie toiles. And above is one more gorgeous Chinoiserie designed by Pillement Remember the Chinese Pavillion at Drottningholm? I love this post!

I don’t know for sure, but this definitely looks like a Pillement Chinoiserie design.

As you can see, these toiles are works of art.

I mean, what is the difference between Europeans lounging in the grass and Asians sitting in a pagoda? In other words, if it’s okay to have Europeans depicted, then why not Asians or any other ethnicity? I mean, the Chinese put people in their works of art, as we will soon see.

Scenic toiles are historical, and many convey what was going on during that period of time.

Now, let’s look at some actual art from China during this same period. The two beauties above are from here.

But, here we can see in this Chinese export art, the use of people doing everyday activities. That is the very essence of figurative Toile de Jouy and Chinoiserie patterns. I don’t see much of a difference. Interior scene with the emperor – Chinese export circa 1780 It is also possible that Chinese artists began to create in the European style, knowing that was what was coveted. I’m not sure. But I did read that the lines became blurred.

Most of the Toiles below are recent adaptions.

And below, more toiles and some in clothing, too! (you can click on any of these images for more information)

I don’t see anything wrong with the depictions of Asian themes and people in Chinoiserie fabrics, wallcoverings, and porcelains.

But, what would you say if you saw a modern-day Toile de Jouy with African Americans wearing 18th-century dresses skipping rope in Harlem?

And yet, that is exactly what one of my favorite designers, Sheila Bridges did. Some of you may recall that Sheila is in my top 20 interior designers. But, really, she’s in my top ten. I adore her work! She created this amazing Toile that she aptly named “Harlem Toile.”

In fact, the pattern sits in the Cooper Hewit Museum in New York City. This one I swiped off her Instagram. You have to see it. It’s animated on insta! 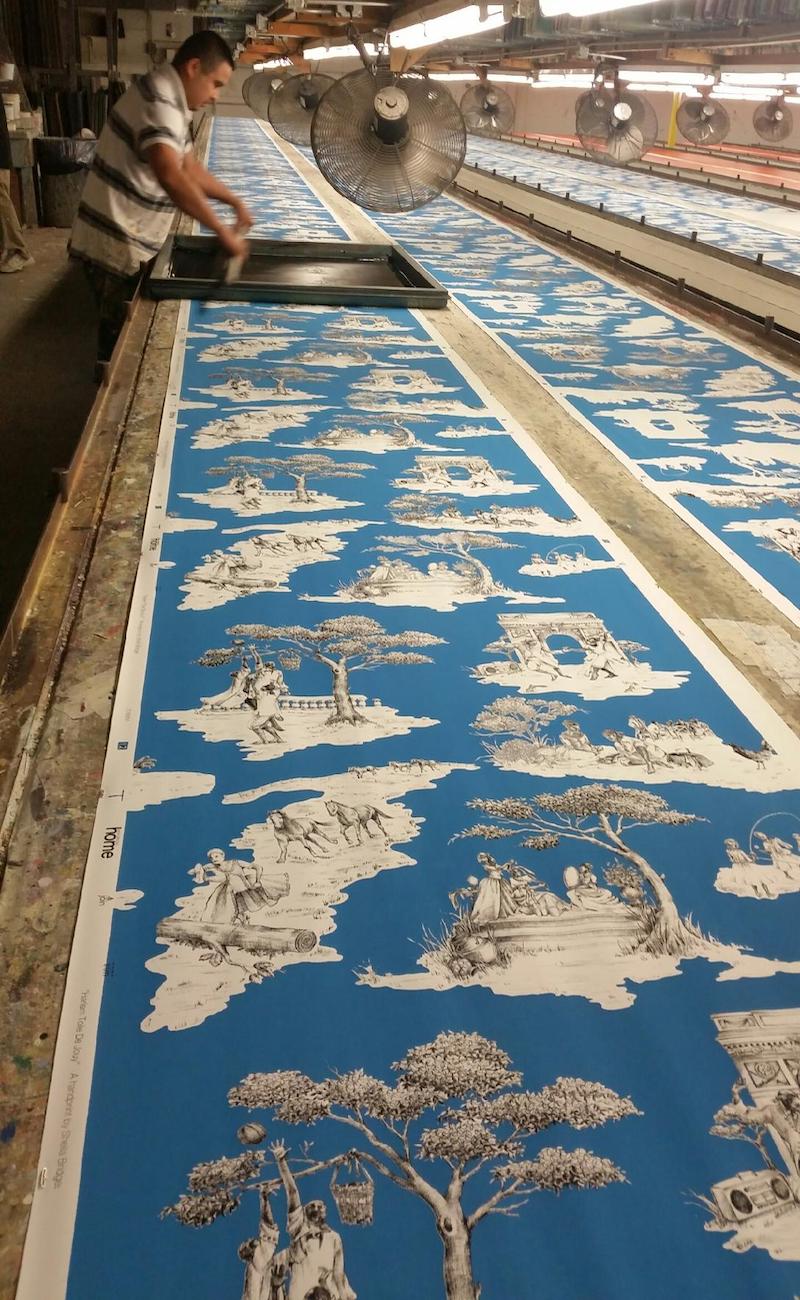 You can also find Sheila’s fabric on the cool, classic contemporary furniture from The Inside.

Sheila knows that the majority of her customers and designers purchasing this amazing fabric are not African American. However, according to some of you, if I put this in my home, it would be a reprehensible action and racist. That’s patently absurd. Of course, if you feel it’s racist and don’t want to put it in your home, that is fine.

(As a reminder for the righteous AKA: “haters.” I am respectfully asking you to refrain from your shaming notes and comments. For those that persist, you will be banned from the site. Shaming people for not sharing your views is ABUSE and, could be psychologically damaging to your recipient. It is bullying behavior and will not be tolerated.)

Toile de Jouy has always existed as a time machine of sorts into the hearts and souls of artisans of the period.

And, here’s the thing. I have a problem with censoring art.

I know, based on the comments last Sunday, that many of you agree with me.

Of course, you don’t have to agree. And, some people don’t want to see ANY people on their fabrics. That’s cool. But, I would never say that it’s inherently “offensive.”

I think the fabrics are exquisite and, for me, always evoke a sense of peace and serenity. Well, I hope that you enjoyed this post about Toile de Jouy and Chinoiserie toiles, as well.

OH! I got my first vax last Thursday. It was pretty much like a flu shot afterward.

PPS: It appears that some people did not read the part about being kind to each other. Either that or the act of kindness is a foreign concept.

I love that this post inspired some profound thinking. That’s good. However, what’s not good is the inflammatory tone a few of you have towards me and others commenting.

Thank you for understanding. I love you all!

PPPS: Monday, March 22nd. The comments have been turned off for good on this post. Some of you are very bad at following the rules, but super good at making inflammatory remarks. The latter is NOT allowed. If you don’t know the difference, then please refrain from making comments. Thank you.

However, I have to say that I’m very sad, right now. It is difficult to love some of you, but I will do so, anyway.