Original Old Home Details – Is it OK to change them?

In case you missed the post on Wednesday, I’m in the process of purchasing a new home in Boston!

Okay, I’m not supposed to give you any deets. However, the listing has been expunged from the internet. The only way you can access it is if you know the address. Of course, that’s a possibility.

However, it would be a pretty slim chance that someone would

A. know the address

C. And, be willing to pay more than the house is worth.

D. Ignore the fact that karma is a bitch.

The inspection is happening on Tuesday morning. I don’t anticipate any major issues I had with the last home I was considering purchasing in Northampton, MA.

Another apartment in the building recently sold. There are only five in what was once a single family home, when originally built in 1880.

My new apartment is located in a beautiful area.

However, I’m not disclosing the location, just yet. Although I’ve given enough clues that some of you Bostonians have a very good idea where it is.

Also, I’m not using any real estate listing images. I took my own. And, I put them in google images and could not find the apartment. Therefore, I think it’s safe to share a few photos I took last week. I need to do that so that I can discuss my feelings about changing the original old home details.

And, I am not going to make the same mistake I made when I purchased my current place.

That is, move in and make the changes later.

It’s much more difficult after all of your stuff is in, of course. In addition, I think I always knew that this place was an interim home for me. There is no point in spending a lot of money here. I wouldn’t have gotten it back.

However, this time, I plan to paint and maybe refinish the floors before I actually move in. And, possibly, a few other things.

As for the few other things, there’s a pretty extensive wish list which I’ll talk about in more detail later on.

But first, what original old home details can one change, and what should you leave as is?

Okay, these days, as we’ve seen over and over, it appears that you can do whatever you like to the interior of an antique building. And, I’ve certainly seen and shared some hideous renovations where some developer or misguided individual stripped a once architectural gem into a bland, cold, soulless dwelling. Here is a room in a building built in 1897. I love the mantel, but there’s nothing else going on here that lets us know this is a 123-year-old building.

Of course, no one lives as people did when these homes were built, mostly in the 19th century.

Hell, I just researched this. Did you know that the first flush toilet (water closet) only came to the U.S around 1890?

As for kitchens, well, we know that a 19th-century kitchen looked nothing like our kitchens of today.

Therefore, it makes sense that these 19th-century beauties will be adapted to our 21st century lifestyle.

However, the problem is that sometimes it gets taken too far, with too many walls disappearing. And, the original architectural details eliminated. Here’s a good example from this Beacon Street apartment in Boston Back Bay. There’s nothing wrong with the stairwell, except that it doesn’t belong in this house.

The ubiquitous kitchen IN the living room. Above and below are two examples from Boston apartments in 19th-century buildings in nice neighborhoods. And, this is just my taste, but please stop painting everything gray.

And, also, I know I’m going to get some push-back, but those bright white LED lights make me cringe; especially, in a home that was constructed in 1870!!! (or there, about) Back then, it was candles, whale oil, firelight, kerosene, and later gas was introduced.

I still feel that artificial light should mimic candlelight.

Laurel, would you please shut up and show us your new place?

Not yet, my dears…

However, here is a cool brick building nearby. And, that’s what I am going to focus on for today.

The fireplace surround, but we usually just call it a mantel. I’m pretty sure that it’s original. However, it just doesn’t have the same refinement of the door and window casings, in my opinion. The proportions are off. And, I seriously doubt that the original had a mirror. In addition, there’s just way too much tile. Incidentally, it looks like two different dye lots. I don’t mind it, otherwise. But, there’s too much of it, and the mantel is way too large compared to the firebox.

Remember when we were talking about ideal fireplace mantel proportions?

So, while the room can take the size of the mantel, the firebox cannot.

And, mantel sizes don’t necessarily change much in size, even in a room with a super tall ceiling. The same goes for the wainscoting.

However, I’d love to change the mantel to something more classical.

So, first, let’s look at some beautiful mantels in other homes built at about the same time. This is one we saw the other day with the pretty apartment with the kitchen in the living room. I doubt this mantel is the original one, but I love it, just the same. This one’s a bit of a train wreck, but the lines are beautiful. This is a lovely mantel on a Victorian in the south end. But that mirror is obviously too big and too ornate, as well. This one’s my favorite, but it’s just a little too small, I believe.

So, in wrapping this post discussing some of the original old home details, here’s my take.

I’m all for changing some elements if they’re not working for you. Of course, I wouldn’t dream of changing the window casings, wainscoting, divine crown detailing, etc.

However, it’s important to note that just because something’s an old home detail, doesn’t necessarily mean that it was done in the best taste to begin with. Of course, some people might love that mantel, and if you’d like to have it, it’s yours. lol

Still, the commonplace practice of gutting antique buildings, full of character and charm and stripping them of all of that, usually doesn’t work for me.

There are exceptions. And, for some skilled designers, they can turn an old building into a cool modern space, without it looking like a cookie-cutter sea of gray and icy-cold lighting.

I hope that everyone is doing well and staying healthy.

And, thank you again for all of your sweet, wonderful comments!

I just want to close with this message.

Despite appearances, change is not as easy for me as it might look. I went through many years of my life, stuck, just like the Intrepid ship. I was stuck in the mud.

How did I get unstuck?

I left my husband. I am not saying that he was keeping me stuck. But being married to him was.

What I now realize is sometimes all you need to do is change one thing. Just one. If you’re feeling stuck, try to focus on the one thing that is scaring the crap out of you.

That’s the one thing you probably need to change, in order to move forward.

Do not be afraid. Yes, there might be some pain.

But, if you’re following your heart, the pain won’t kill you. In time, it’ll make you stronger, and you’ll see yourself growing in ways you never dreamed were possible. I’m living proof of that. Photo by Nong Vang on Unsplash

Blue moon, that is!

I think we need all of the positive messages of hope at this time in our lives.
But, if it doesn’t ring true for you, that is okay too.

And, below are some additional fireplace mantel ideas I’ve added. 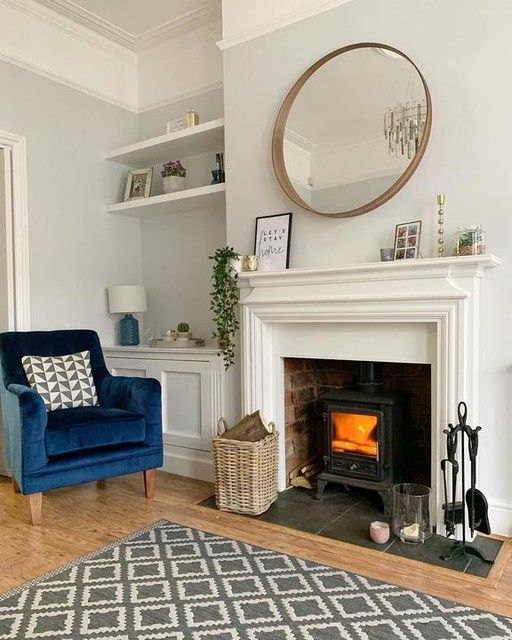 I would add more to the back and extend the mantel shelf. And of course, it would be painted white.