The Most Amazing English Country House Of Them All

Before we get into today’s beautiful topic. (well, I think so) about the most amazing country house of them all.

Yes, WE!!! Because without you, there would be no win. So, thank you, thank you to the many of you who voted. I won by over 800 votes! The contest was for the top 100 interior design influencers nominated on Design Hounds.

So far, I have won an expensive vent hood which I cannot use. lol and a free trip to Orlando for the kitchen and bath show.

I went last year and it was THE best group ever and waaaay too much fun. Veronica Eagleson sure knows how to pamper the bloggers on tour with her. 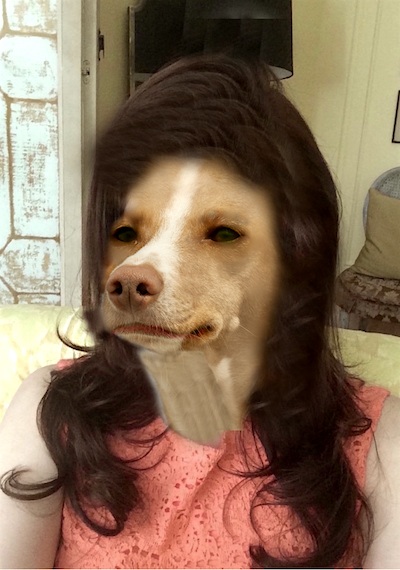 And I’ve also been asked to speak on a panel again.

Oh, and I do have the option to give the vent hood away, so please stay tuned for that.

There is another prize for a trip to Milan and that decision is by a Jury. It is unlikely that I will win that one too. But that is absolutely fine.

So enough about me…

And onto the beauty.

After we spent about two hours–tops at Ben’s, we got on the bus and I searched for my cell phone charger which as I mentioned was nowhere to be found.

Ben was with us on the bus and he took us to neighbors of his in Long Bredy, very close to Little Bredy, where Ben lives. Both are in the county of Dorset.

I honestly didn’t think anything could top Ben’s home.

Oh, don’t misunderstand. Ben’s house is sublime and I adore it and those gardens, oh my!

But this next place is on a completely different plane.

It is the home of Harriet and Anthony Coote Sykes.  They’re blue-bloods, for sure and poor Mr. Sykes, or actually, he might even be a Sir, was in the hospital getting ready for a little foot surgery. However, Mrs. Sykes could not have been a more charming hostess.

We walked into the entry and I nearly passed out.

The home was built by Anthony Sykes some 20 years ago; his dream home. They named it Bellamont House.

He chose to build it in a “sham” neo-gothic style.

What does that mean?

It means gorgeous architecture together with massive amounts of whimsy and unabashed fakery.

Dang, that phone charger. But never mind. I needed to get pics of this one and we were allowed.

As I mentioned, one of my biggest challenges was getting shots where I didn’t have a close-up shot of someone’s arse because they stepped into the frame just as I snapped.

And while I have some great shots, I have supplemented some from both an amazing spread in Architectural Digest and a couple that Ben had taken and used on his blog. I’ve slowly been reading his blog and if you haven’t, you must. It’s beautiful and a lot of fun.

Okay, we can tick that box off. Although I never saw this particular view. I didn’t see this view either. We are actually looking at the back of the house. However, I did see this view from the upstairs master bedroom.

This is only a tiny portion of it because the real panoramic view is far greater.

It is a jaw-dropper, for sure!

After a brief introduction by Harriet in front of the house…

We were ushered through a vestibule. (Are those not the most way cool umbrella holders you’ve ever seen?)

The above two images are via Architectural Digest. This view is in the opposite direction. Ben Pentreath took this image.

Those columns that look just a little too flat are paper.

And there a lot of them!

With a wink and sly smile, Ben said that he had “chastised” Sir Anthony because “The Corinthian order is supposed to be on top.”

But it was about then, that I knew that I had to seize the chance to take photos of empty rooms

I quickly slithered into the adjacent sitting room which is quite large and a maximalist’s English country house dream! Love the sun streaming in.

I did try to follow some of the commentary, but it’s difficult for me under any circumstances.

Some of the paintings are their actual ancestors and some are fakes. (repros) Some are the real thing meaning, genuine old oil paintings. Then, I quickly ran over to the middle of the room where jutting out is this incredible dining room. More swooning at what I could not believe I was seeing! How gorgeous is this!

Then, I turned around to get the fireplace. I cannot express how fabulous it was standing in this incredible room! 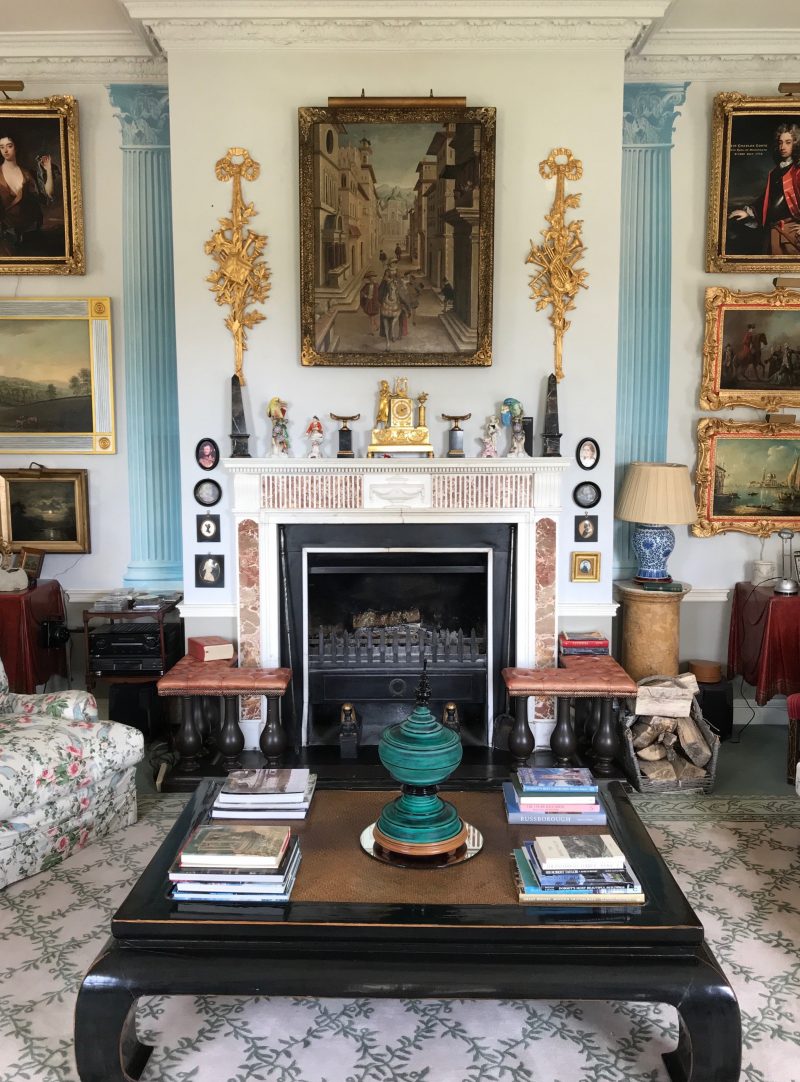 This was such a difficult shot because there was a lamp in my way and I either had to shoot above it or stand in front, but the latter was too close.

Normally, I would’ve liked a little breathing room at the bottom of that fabulous opium coffee table, but over-all, I’m happy that I got at least a relatively straight shot. 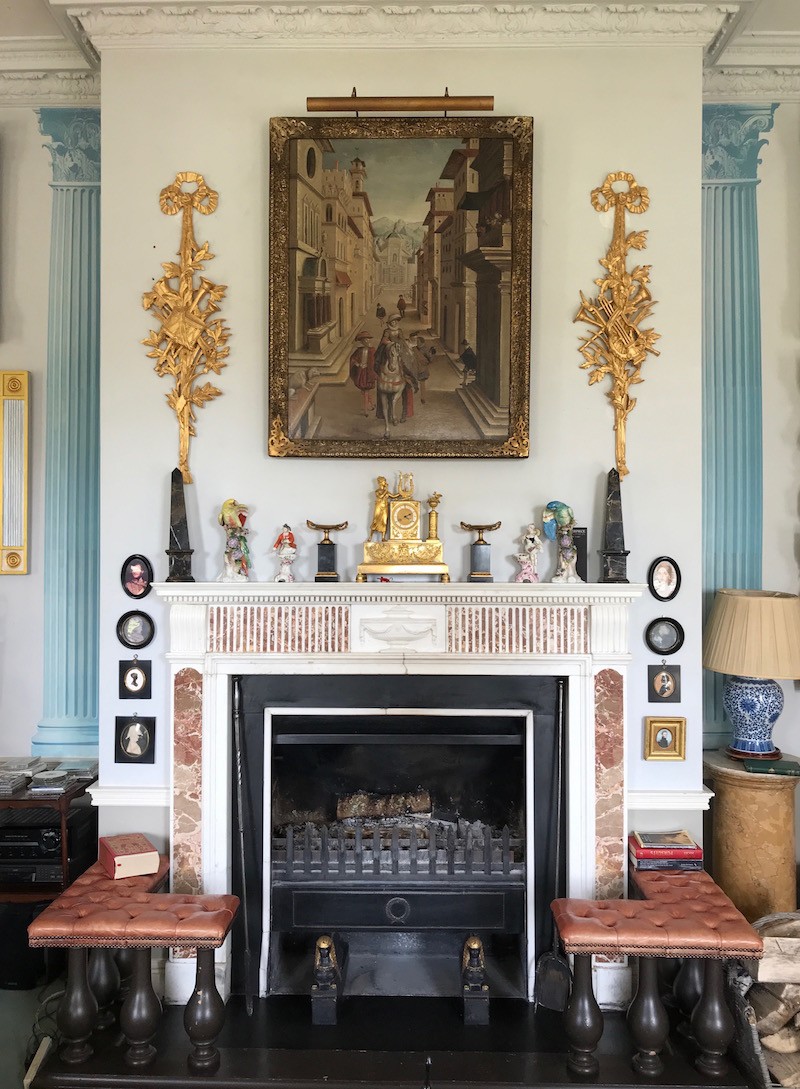 A slightly closer view which shows more detail and a better view of the Georgian English fender. These are in ALL of the great English country houses. That means they are in pretty much every house we visited.

There are numerous companies which custom-make these fireplace fenders in the UK.

I’m not sure if you can get them here. I mean, you can probably have something like this made. If anyone knows of a great source in the US, please let us know! Then, they came pouring in– with Ben. Was I listening to a word he was saying? Well, some of it yes, because I remember making a remark about the chintz.

Here’s where it gets really fun!

We used that chintz on two love seats for a job circa 1993 when I was working for another decorator!

It’s from Lee Jofa, but alas it’s been discontinued.

However, I found a few yards on Etsy. (the link is in the widget below)

They should really call it “Heavens To Etsy!” ;] This is a link for ten yards. Please see the widget for the 3-yard piece.

So glad that I found this image in the Architectural Digest article.

This is exactly how it looked that day, just sunnier.

And this one of the wall-paper banister.

I didn’t take any photos of the bedrooms. I feel a little creepy taking pics of folk’s private areas. But while most people were upstairs, I ran back downstairs to see if I missed anything.

Yes! The not-very-big-but-oh-so-charming-kitchen. This is my photo.

Their daughter was visiting with her adorable baby and she came in and we had a lovely convo.

These people are all sooooooo nice and seemed genuinely happy to have us invade their home! I didn’t get the other side of the room, but here it is via AD.

And here’s another image by AD of the living room. The article wasn’t that long ago. Yes, some things may have been changed by the homeowner.

But I found an older image taken by Ben and the fabulous green Chinoiserie whatever that thing is on the coffee table – haha was there. That means in all likelihood, the stylist took it off and stuck the flowers there instead.

If you scroll back up to the image with Ben, you’ll see that coincidentally, the angle of the shot is very close. What do you think? I think it’s a fabulous piece but they probably thought that for the photo it called too much attention to itself. It doesn’t in the room, but photos are different. Anthony and Harriet going for a stroll on their property with the dogs and their sheep! I’m still not sure if he has the title of “sir” but he should! So, I’m sticking with it! (I was informed later, that while a gentleman, Anthony has not been knighted by the queen– yet.)

And for fun, I made a little widget for y’all.

Make no mistake, I had to stop myself so that I could write the bloody post. ;]

What that means is making these widgets and searching for all of the beautiful things is way too much fun for me!

I could’ve gone further, but hopefully, I caught at least part of the essence of Anthony’s and Harriet’s fabulous decor.