Or maybe you have.

However, if you haven’t, I promise you that you are in for a tremendous treat. is the next in the series on interior design icons that I adore, admire, respect beyond all measure and who have influenced my work, hugely.  Barbara Barry has been perhaps one of the most influential and there’s just so much to share, therefore, this will be a post in two parts.

I was working for a decorator in Bedford, NY. If you don’t know, Bedford is a quaint historic village in northern Westchester County, NY and since it’s a stone’s throw from “back country Greenwich, CT” [as we call it], it retains much of that New England white clapboard flavor and charm. Old money. Or at least that’s how it looks.

Back in those days, the over-riding esthetic in Bedford, was largely stuck in the Nancy Lancaster mold of chintz, very traditional furnishings— lots of green and pink. Cabbage Roses. Not that there’s anything wrong with that. I love Nancy! But, alas… the early 90’s interpretation felt tired and completely hackneyed to me.  My boss was a master of the look— “all in good taste” she would say. Sure. Absolutely. Very tasteful. It is not my aim to disparage her taste or anything at all; I am grateful for the opportunity and learned a tremendous amount from her— about the business. However, our innate aesthetic was as different as [please forgive the cliché] chalk is to cheese.

One day, I received my new issue of House Beautiful. I think. Or maybe it was House and Garden. Not sure. As I was thumbing through… I happened on an article which began with this photo. [yes, saved all this time and have not seen it anywhere else] and then this photo… 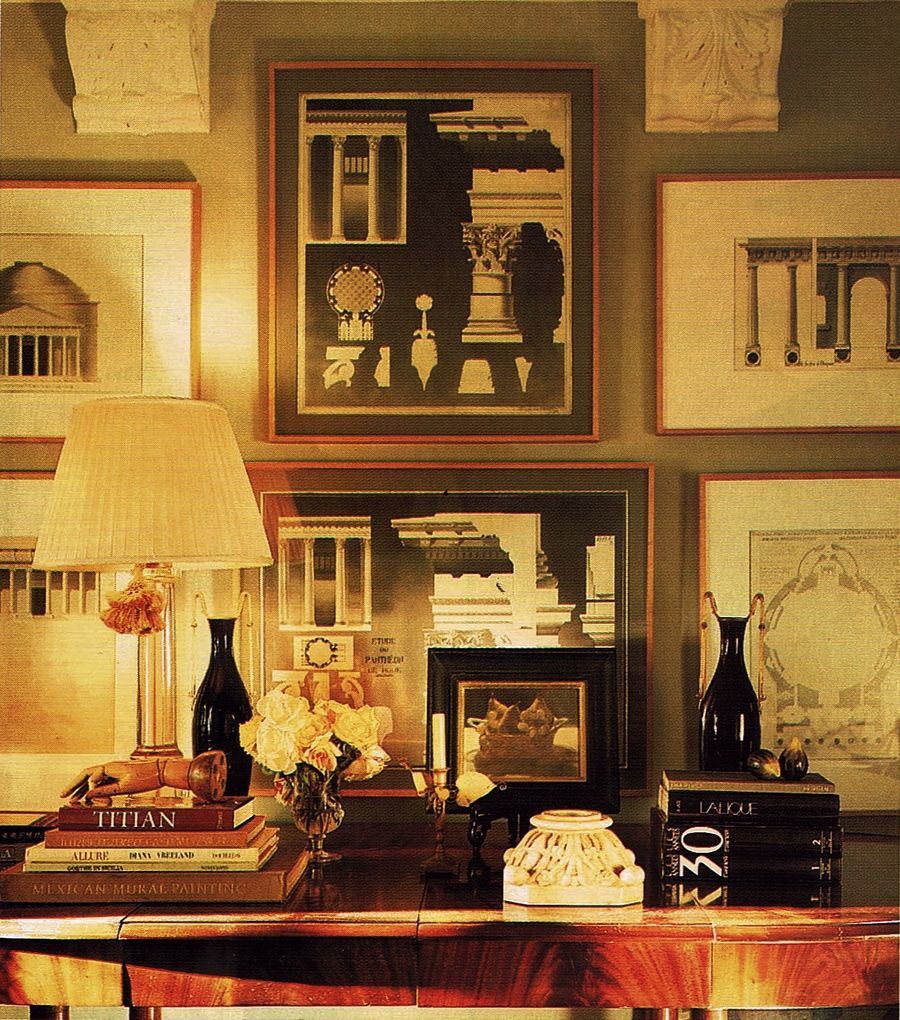 I couldn’t stop looking at them. I WANTED to LIVE in these rooms…

They belonged to a designer whose name I had never heard before,

I gobbled up her every word. She used words like “lifestyle” and told tales of how every day— she had freshly starched and ironed sheets scented with lavender. And each morning there was a rose on a fine silver tray for breakfast where she feasted on her cereal and fresh fruit served on the good china and eaten with the good silver sterling.

This is how she lived.

Huh? I thought.  It wasn’t that I thought that how she lived wasn’t a good thing, because I definitely did; it was that I thought that it was impossible. At the time, I was the mother of a rambunctious [to put it mildly] pre-schooler and soon-to-be pregnant with our second son. And, I was working three days a week. I didn’t even own such things. But that didn’t stop the fantasizing.

I wanted to be Barbara Barry.

I loved everything she did. I loved green. I loved chartreuse. I loved how she mixed old and new and the colors. Indescribably rich, yummy colors! The kind of colors that don’t have names and defy an easy description. I loved her aesthetic– the juxtaposition of the classical with interpretations of Jean Michel Frank  and Emile-Jacques Ruhlmann with contemporary styles and antiques. She talked of mixing colors until she came up with some really weird green that “just worked.” It was atonal. Like Stravinsky. Genius! Everything she did and said had me spell-bound; it still does some 21 years later. Exactly the same.

One day, I brought in the magazine to the decorating shop and eagerly showed it to my boss with “very good taste.”

She looked at me blankly… and managed to get out a rather stiff, patronizing– “that’s nice.”

I felt like Salieri listening to the Emperor complaining that Mozart’s music had “too many notes.”

After that, I began to see Barbara’s name elsewhere.She had licenses with Baker furniture and HBF [Hickory Business Furniture]. She designed fabrics and rugs for Tufenkian. And it was all beyond amazing!

she redecorated her home in Beverly Hills. Totally different. Oh, there was still that early Hollywood glamor, but this incarnation was light, airy, and elegant in a way both old-fashioned and modern at the same time. And I am so sorry, but I thought I had saved those photos, but for the life of me, cannot find them. However, there are many more images to come.

About a year after I began my business, Barbara came to NY to speak at the Baker, Knapp and Tubbs showroom. We didn’t have email in those days, of course. I will never forget the invitation. It was wrapped in a velum envelope. Inside, the paper was heavy stock. There was green somewhere and her beautiful signature oval. The invitation was also on vellum. No detail went unnoticed.

Of course, I went.

and then, a few years later, I went to hear her again. If you love interior design, and Barbara Barry is speaking, please do yourself a favor and drop everything and go. Hearing her talk about her work and her process complete with a slideshow presentation is like going to hear the pope.

In person, not only was she incredibly elegant, she was so lovely; so humble and gracious. She was and is the living embodiment of her work. Serene, calm, classy, down to earth. She gave a talk that I’ll never forget. Never having taken an interior design course in her life, like many great designers— Barbara is completely self-taught. However, in all fairness, her mother was an artist and so is Barbara. And not just an artist, but a damned good one that.

In fact, every product that she designs, begins as a beautiful watercolor.